Posted on September 8, 2013 by Legends of Lorata 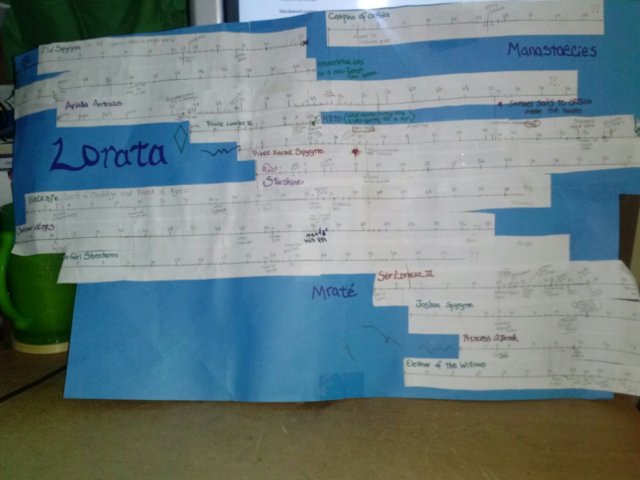 This is a time line that I made about my characters. It shows when they’re born, the use of their lives, and their death. basically, each strip of paper is the length of their life. There are a couple of strips that could not fit completely, either because their life started before what fits on here, or they live longer than what I had room for. It took me hours to make it, & I put major events of their lives on them, along with the age that they were when it happened. I even measure things carefully so that everything’s to scale, & I lined up different characters lives appropriately. So now, you can see when certain people were born compared to when others were, and how old everyone was when certain things in the story happened. Here in thete I have what year it was on Lorata. For example, Arialla was born in the year 4687. (Keep in mind that Loarat does not have b.c. and a.d., so even though this looks like it would be the future, it’s actually not.)

Eleanor Willow is the author of the high fantasy series Legends of Lorata, which takes place on a medieval-style world filled with elves, dragons and faeries. There is also a fourth race, one that is rare and magical: the angelic Starr. Lorata is a planet where four gods are known: good, evil, elemental and celestial-- and there are plenty of legends about them all! One of the most important ones is the prophecy of Jenh's champion, Loracaz, who is promised to return to the land whenever evil threatens to take hold. There are currently four books planned. The first one is completed and currently being edited. Any news I have on about publishing will be shared as it comes in!
View all posts by Legends of Lorata →
This entry was posted in Character & concept sketches. Bookmark the permalink.