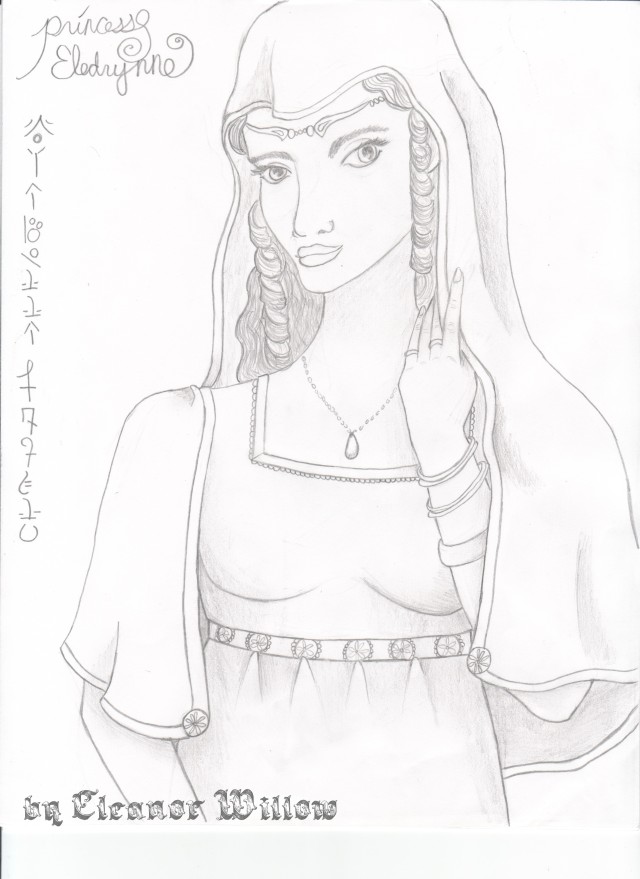 Eledrynne came to life when I was looking over some names that I had thought about using. I had written them down a long time ago, and found them again back in the spring or so. I found ‘Eldrin’ and ‘Eldrich’ as names for a very unrelated character, and went with Eldrich for that one. Still, I wanted to use Eldrin, but I didn’t need a male character, so I added to it and came up with Eledrynne.
She was just what I needed for the part of book two that I was working on: a mysterious yet elegant princess from a land that Zarrek knew little about… a little competution for Starshine, in a way, though she wouldn’t know it. Through Princess Eledrynne, I have been able to show the turmoil going on inside of Zarrek.
The dress is certainly medieval European in style, but her bracelets and veil are Indian-inspired. She had a definite sense of modesty and shyness about her, but then again the mystery and beauty. You can see why Zarrek would be so interested in her!

Eleanor Willow is the author of the high fantasy series Legends of Lorata, which takes place on a medieval-style world filled with elves, dragons, and faeries. There is also a fourth race, one that is rare and magical: the angelic Starr. Lorata is a planet where four gods are known: good, evil, elemental and celestial-- and there are plenty of legends about them all! One of the most important ones is the prophecy of Jenh's champion, Loracaz, who is promised to return to the land whenever evil threatens to take hold. There are currently three books completed, and the first one can be read online. Book four is currently being written, and a fifth will most likely be in the future. Any news I have on about publishing will be shared as it comes in!
View all posts by Legends of Lorata →
This entry was posted in Character & concept sketches and tagged Character image. Bookmark the permalink.